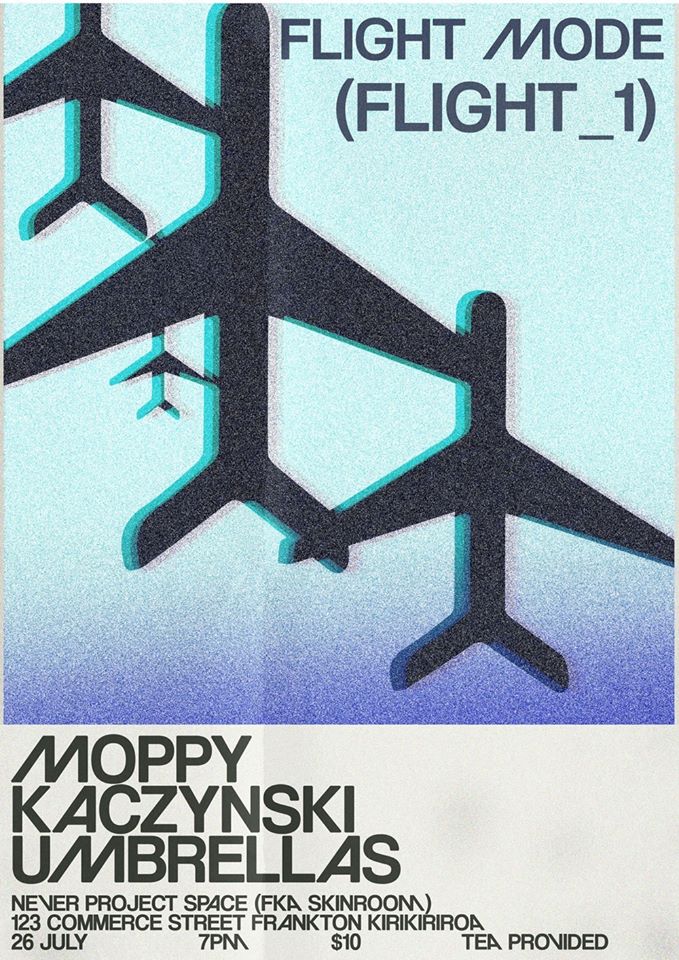 One more time with feeling....

We are now FINALLY able to do this show 'IRL' and we are quite excited about it. We hope that those of you who tuned in for the livestream during lockdown will join us next Friday for the full Flight Mode experience.

We'll be transforming our little gallery space to make it extremely 'chill' 'vibey' & 'buzzy' etc in keeping with the spirit of the event. Tea and limited seating will be provided but we also encourage anyone to bring their own blankets, cushions ~ whatever it takes to get into Flight mode-mode.

*Half price ($5) for anyone who comes in their PJs.

This event will be the first of many Flight Modes (touch wood cuz 2020!) a new monthly event exploring ambient music in the broadest possible sense. For Flight 2 - We're psyched to be bringing two OG beat makers down from Auckland. Might wanna dust off your dancing shoes for that one...

Moppy/ M0ppy/ M0PPs is a sound artist and musician who makes..
“epic, blipped out..woozy.. warped lo fi” - I nearly Died of Boredom
“...the rare kind of ambient you can dance to” - Vice

Moppy has released three full length albums to date - Mokai [2010] Seconds [2013] and Hexakosiohexakontehexaphobia [2016]. The latter which saw him delve into more ambient territory.

He has composed for short and feature films, installations, and created the theme music for the podcast Indigenous Urbanism.
He uses whatever equipment he can get his hands on to make music to evoke feelings of something you can’t get your hands on.

Moppy is one of many musical aliases of Thom Burton [SoccerPractise /Guardian Singles]. His fourth release, Flying Sorcerer EP, will be available from April 2020.

Kaczynski is the ambient drone project of Adam Fulton (Hedge Fund Trader, Wakhan Corridor) consisting primarily of tape loops and samples recorded off the shortwave waiting for band practises to start some time in the mid 2000s.

Umbrellas is the mutable musical alias of ex-expat Nicholas Walsh, formerly of the band Deer Park. His debut Aotearoa live performance will be a set of all new music inspired by cassette tape experiments, new-age op shop finds and lo-fi beats.