Having claimed the bunker the previous evening, I was sad to find that the Acoustic Technologies speakers installed there had mismatched drivers. To put it simply, this meant that the sound differed from speaker to speaker, especially at the low end.

However, a silver lining became apparent when, this morning, having inquired about this variance, Matt and I swapped them for a set identical to those which will be in use for the performance on the 21st. On top of now being able to work on the same equipment I will use in 10 days time, this also required a new amplifier, the fan in which is much quieter that that which I used in the bunker the day earlier. 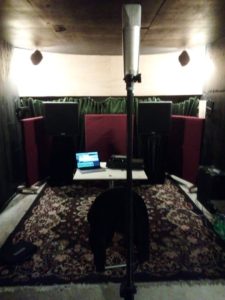 I attend pedantically to the cabling, and arrange some baffles around the large Eastern Acoustic Works speakers, feeling a sense of purpose and permanence about what I am doing. Now, with a quiet space which I am unlikely to need to move from, replete with wonderful equipment, I feel excited to begin preparations in earnest, and ready to sequester myself.