Today I spent the bulk of my time in Studio 3, improvising using a series of tones generated and manipulated within my preferred Digital Audio Workstation (DAW), Reaper, running to the speakers via one of the two 16 band graphic equalisers I had taken with me from Auckland. The purpose of this was initially to familiarise myself with the speakers and other equipment I would be working with that day, and to get the day off to a creative start. In the lead up to my departure, this approach was also (more or less) how I had been familiarising myself with four channel diffusion.

With juices following, I begin mixing the selection of sounds I recorded yesterday using a pair of headphones loaned from Matt. I quickly become dismayed, finding that all but of few of these pieces of sound are infected with the whistles of my badly blocked sinus and nasal passage. Indeed, it is taking much concentration to prevent myself from sniffing while attempting a take, with several drops of clear, runny mucus landing on the ply-board table I am working at.

With my head pounding, I resolve to mix what I have recorded to the best of my ability so as to begin assembling them into a rough structure within which I intend to improvise with side-chain tracks of modulation and the aforementioned EQs. I arrange 10 of the tracks in a loose layered progression pictured below. 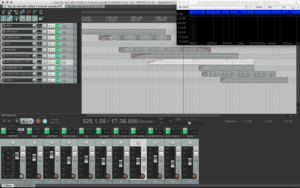 As I prepare to play, a band begins rehearsing in the studio next door. Their volume is substantial and I resolve to move as far away as possible. I end up taking refuge in a space known as ‘the bunker’ ‘the cave’. It is located at the far end of the complex. Upon entering, I feel settled, and positive. As I set up my equipment, I think to myself, ‘yes, this is the space for me’. 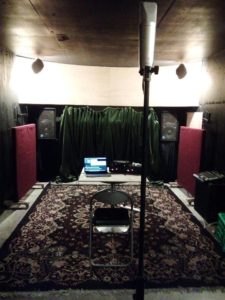