I have had a great time over the last two and bit weeks, and am very much looking forward to this evening’s concert. It is not often I feel as optimistic about a live presentation as I do currently. This, surely, is largely to do with having had the tri-fold luxury of space+time+equipment ready to hand over the course of my time as an artist in residency at Magnet. It is difficult to overstate the value this sort of focused period of work represents, and I am not going to go to great lengths to attempt to do it justice here. Instead, I would like to extend my sincerest thanks to all those who have been involved in my time. A short list below (apologies to anyone I’ve neglected!):

– Matt, Erin and Thomas at Sonorous Circle, who brokered the trip.
– Matt (again) at Magnet, who I suspect spends more waking hours there than doing anything else.
– Lily Tait and Tim Player, with whom I shared a quality hour of improvised mind melding (a section of which is to be released in the near future).
– Tim (again) and Renee Barrance (Barrence?) of Ov Pain, who hosted me in during my first week here and are dear friends.
– Sean and Annalee at MIUC who do such an amazing job providing space for weird and spontaneous things to occur.
– Pat O’Brien, whose late night show, O’tomorrow on 3RRR, I had the pleasure of performing/guesting on one evening.
– Maggie and Hellen at the Brooklyn Arts Hotel, whose warm interest in what I have been doing has been invaluable.
– Erin Taylor (again) and Dale Gorfinkle, who I am excited to play with tonight.
– Gerard Crewdson and Peter Farrah, who I had the pleasure of joining for an impromptu session at BLINDSIDE Gallery in association with Gerard’s exhibition, Serpent Songs/Windshadows, presented by Liquid Architecture and BLINDSIDE in association with The Audio Foundation.
– Ben Byrne, whose Avantwhatever festival provided such a stimulating start to my time here.
– The vibrant group of expats, music fans, and friends old and new, who I’ve shared company with over the last two and bit weeks. 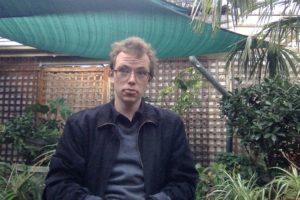